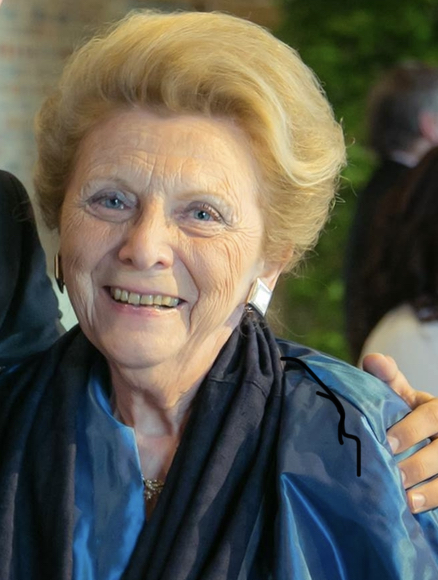 Secretary of Cultural Affairs Françoise de Saligny was born on the 27th November 1938 in Etterbeek, Brussels, and passed away on the 21st March 2020.

As a descendant of a noble French family line on her father’s side and with a Swedish born mother, Françoise de Saligny’s interest in Finland was sparked at a young age. Her father’s business connections to the Nordic timber industry cultivated her life-long relationship with Finnish culture.

In her youth, de Saligny worked at the Royal Museum of Fine Arts of Belgium under the direction of Baron Philippe Robert-Jones, a faithful admirer of the Finnish arts. Through her work at the museum, she soon accepted a position as Secretary of Cultural Affairs at the Finnish Embassy — a role she would inhabit for decades, before eventually retiring. Even in her retirement years, de Saligny actively worked to encourage Finnish and Belgian partnerships, and promote Finnish culture to the Belgian society.

De Saligny was a culture professional, whose profound knowledge of the arts and extensive expertise of the cultural fields ignited passion and energy in her endeavors. She had impressive social skills for networking, and for finding the right people for the right causes. It was de Saligny who brought the Finnish arts to Belgium, even before Finland joined the EU. In the 1990s, she took part in the organising of the ambitious A. W. Finch exhibition in Belgium and in Ateneum in Finland. De Saligny was a brilliant ambassador for Finnish culture, and always made sure to inform her friends both in Finland and Belgium about important upcoming Finnish cultural events.

Françoise de Saligny was awarded The Order of the Lion of Finland for her efforts in promoting Finnish culture.

“While working as the Secretary of Cultural Affairs for the Embassy of Finland in Belgium, Françoise de Saligny had a significant impact on the cooperation between Finland and Belgium. She was an unfaltering part in the founding of the Finnish Cultural Centre for the Benelux, today knowns as The Finnish Cultural Institute for the Benelux, and has remained a continuous contributor to its operations. She especially opened the doors to the cultural life in Belgium. I doubt that without her wide cultural connections the Belgian Queen Paola would have in 1996 visited the Finnish Studia Generalia lecture at the University of Antwerp, which was a series organised by The Finnish Cultural Centre and hosted by the Finnish Culture Foundation’s agent Paavo Hohti. Her visit was inspired by the programming made at the Cultural Centre. The event was an exceptionally important one for Finland, for the Cultural Centre, as well as for the University of Antwerp, as it was a first royal visit for all involved. The Queen’s visit meant a significant recognition of the Cultural Centre and its work. My cherished friendship with Françoise has lasted over many years, I last met her during a visit to Finland in November 2019, and we remained in touch even until her last days. A good friend and significant cultural driving force has now, much to our sorrow, left us all.” Marjatta Oksanen, the first Director of The Finnish Cultural Centre/Institute 1994-1996

”Françoise had a great interest in the Cultural Institute, which was previously The Finnish Cultural Centre, and its operations and was of pivotal help in locating appropriate contacts. As well as in the integration into Belgian society. Over the years, we became good friends, and we always stayed in touch. In her last correspondence, her biggest regret was not being able to attend the Finnish Design exhibition in Brussels this spring, due to the confinement!” Johanna Lindstedt, Director of The Finnish Cultural Centre/Institute 1997-2001

“Françoise was a very active participant in our events, and she always had some time to spare to let us know of how she was and of the latest news. Her interest and love for Finnish cultural life was deep, stretching widely over different cultural fields. She was always informed about the latest happenings in Finnish culture, especially avidly following the classical music scene.” Kalle Jämsen, Director of The Finnish Cultural Institute for the Benelux 2007-2010

The Finnish Cultural Institute for the Benelux and its employees would like to extend their deepest condolences to Françoise de Saligny’s family and loved ones. We wish you all strength and support in this time of grief.