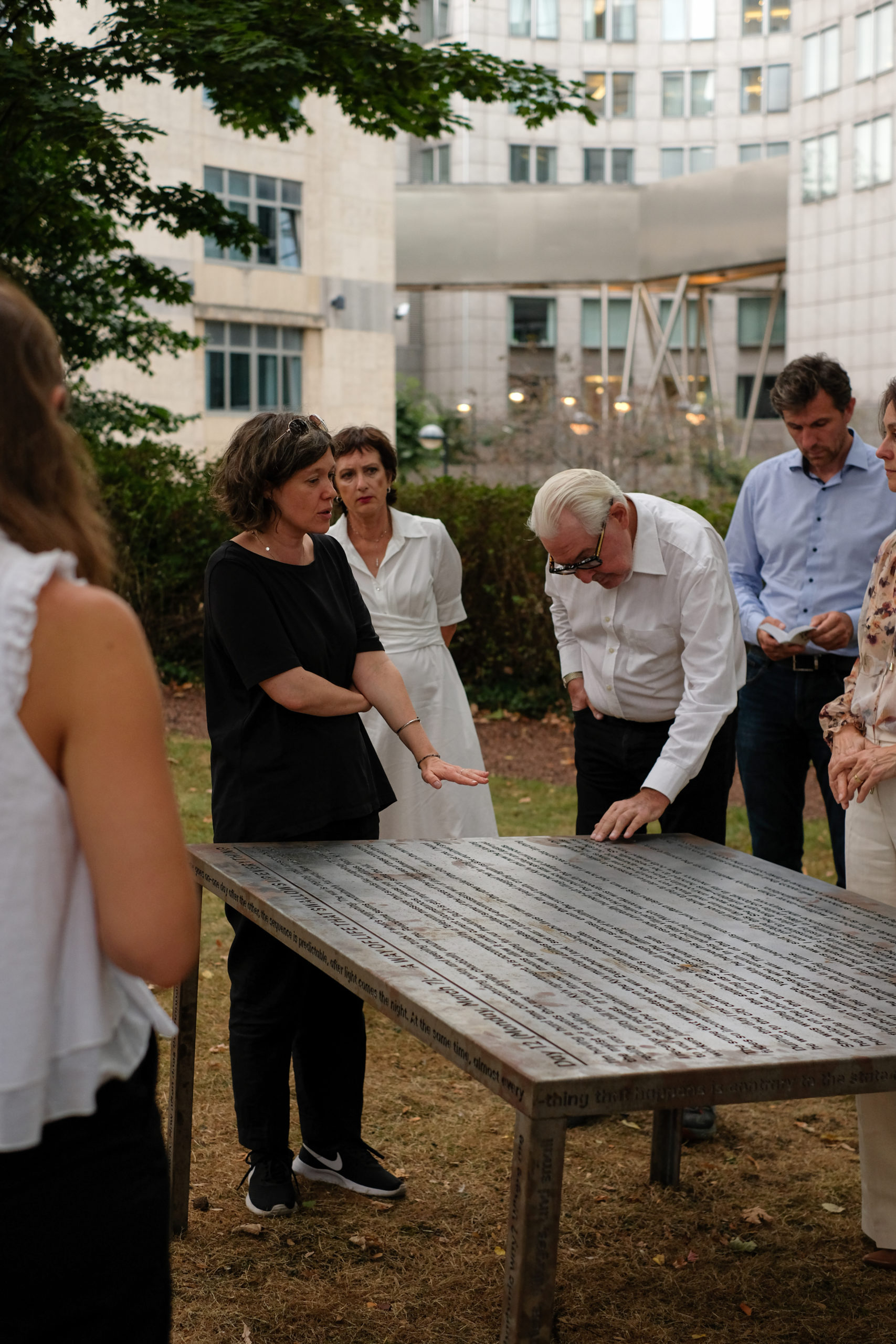 Yevgenia Belorusets‘ The war diary, exhibited at the 59th Venice Biennale 2022, is now open to the public at the Citizens’ Garden in Brussels in the form of a powerful artwork. The 7th of March, Day 12 in Russia’s war against Ukraine is engraved into the rusting iron table for the public to remember and to reflect on.

“Every minute, every hour and every day of this war constitute a new crime. Every daily entry in this diary was to be the last.” Yevgenia Belorusets

Over 70 people gathered at the Citizens’ Garden yesterday afternoon to be part of the inauguration and to hear Yevgenia’s story. The event was attended by members of the European Parliament, staff from cultural institutes, embassies and permanent representations to the EU as well as citizens of Ixelles.

In his conversation with the artist, Björn Geldhof, Director, at the PinchukArtCentre, shared that reading Yevgenia Belorusets’ diary entries became a ritual for him and many others. Their conversation also revealed the decision behind choosing the diary entry from the 7th of March as the text to be carved into the table, highlighting the depth of care and warmth shown by Ukrainian citizens during war.

In her speech, Laura Boxberg, Director of the Institute and former president of EUNIC Brussels stated that “This artwork is a symbolic place to gather and discuss. I invite you all to use it and this beautiful park: bring your family, friends, colleagues, neighbours. Bring politicians and decision-makers to reflect on the war that’s killing people in the heart of Europe at this very moment. Let’s not forget, let’s act.”

Read the Interview with Yevgenia Belorusets featured in Helsingin Sanomat, the biggest daily newspaper in Finland. 07.09.2022 (in Finnish)

Yevgenia Belorusets’ work One day more is on display until October 29 at the Citizen’s Garden of the EU Parliament in Brussels, Rue Vautier 62.

Short Description of the artwork

A Wartime Diary is a series of texts I started on February 24 in Kyiv. I was writing them in German for the newsmagazine Der Spiegel, but soon the daily entries began to appear in translation into English and other languages.

My native languages are Ukrainian and Russian. But in the first hours of the war other languages seemed better at making events visible faster. In wartime, languages turn into transportation networks for news about catastrophes and crimes. As a catastrophe is unfolding, the act of witness feels meaningful only if there is a chance for it to stop the catastrophe.

Every minute, every hour and every day of this war constitute a new crime. Temporal measurement breaks criminal acts down into parts, and each fragment of time may bear witness in court against those who unleashed this war.

Every daily entry in this diary was to be the last. I kept a diary but every day I was convinced that war would end on that day, that it could not go on even a minute longer.

Called “One day more,” this installation allows me to ponder the weight of a single day in the warzone. Words become one with things. In this war, the ruins of objects and cities will bear witness together with human beings. The surface of this object becomes rusted over: memory grows less distinct, but it does not vanish.