Opening of One day more by Ukrainian artist Yevgenia Belorusets 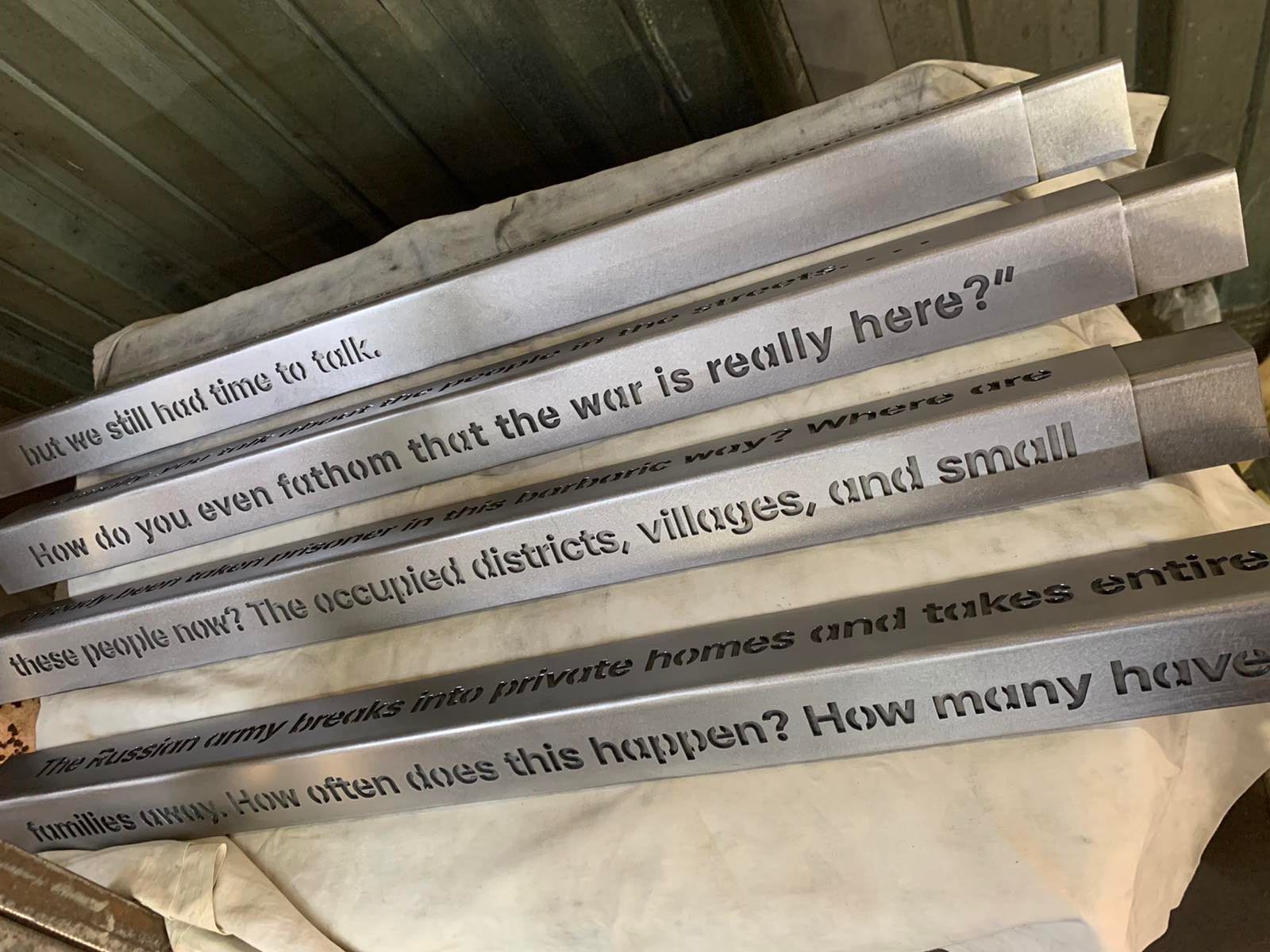 We are excited to announce that for the first time ever, an artwork by a Ukrainian artists will be installed at the Citizens’ Garden at the European Parliament in Brussels. The inauguration of the artwork One day more from A Wartime Diary (2022) by Ukrainian artist Yevgenia Belorusets will take place on the 6th of September, at 17:30 CET.

One day more is a powerful artwork by Ukrainian artist Yevgenia Belorusets created in cooperation with the artists Dana Kosmina, Uliana Bychenkova, poet and translator Greg Nissan. The piece has been commissioned by EUNIC Brussels and the Culture of Solidarity Fund of the European Cultural Foundation, to support those who are working and living in the war zone. Produced in Kharkiv, under exceptional circumstances of Russia’s full-scale war against Ukraine, the artwork is transported across borders, finding its temporary home in the Citizens’ Garden of the European Parliament in Brussels, where it will be open to the public from the 6th of September until the 29th of October 2022.

Produced in Kharkiv in August 2022, as the Russian shelling of the city intensified.

The table, a sign of solidarity, hopes to become a place of gathering and sharing, and a place to contemplate the words of Yevgenia Belorusets’ wartime diary. With entries from the diary carved into the surfaces of the table, these experiences are engraved into the hard metal as well as that of collective memory.

”Called One day more, this installation allows me to ponder the weight of a single day in the warzone. Words become one with things. In this war, the ruins of objects and cities will bear witness together with human beings. The surface of this object becomes rusted over: memory grows less distinct, but it does not vanish” shares Yevgenia Belorusets.

The inauguration of the work will begin with a welcome by Katarina Barley, Vice-President at the European Parliament and H.E. Vsevolod Chentsov, Ambassador, Head of the Mission of Ukraine to the EU.

Laura Boxberg, former EUNIC Brussels President and The Director of the Finnish Cultural Institute for the Benelux and André Wilkens, Director of the European Cultural Foundation will give short introductions.

This will be followed by an interview of Yevgenia Belorusets by Björn Geldhof, Director, PinchukArtCentre, Kyiv, after which the audience will have a chance to ask their questions during a brief Q&A.

“We cannot forget what is going on in Ukraine, this artwork will be a symbolic place to gather and discuss and a physical reminder about this horrific war. I am honoured to work together with Yevgenia Belorusets and our partners on this project. Culture and art help to create a space for understanding even in the darkest of times and as cultural institutes and organisations we must play our part in making sure the support and opportunities are created for artists” Laura Boxberg and André Wilkens.

The artwork is commissioned by EUNIC Brussels and the Culture of Solidarity Fund Ukraine powered by the European Cultural Foundation. The exhibition is possible thanks to the generous support of the European Parliament, providing a beautiful space in the Citizens’ Garden for the artwork to be exhibited. Partners also include Mission of Ukraine to the European Union, PinchuckArtCentre in Kyiv and M HKA. The musical programme is supported by the U.S. Mission to the European Union.

Accessibility: The Citizens’ Garden is accessible for people with reduced mobility, there is a chair lift and ramp to enter the garden independently. In case of questions about accessibility, please contact +022844321.

The artwork is commissioned by EUNIC Brussels and the Culture of Solidarity Fund Ukraine powered by the European Cultural Foundation.

Partners include the European Parliament, Mission of Ukraine to the European Union,  PinchukArtCentre in Kyiv and M HKA.

The musical programme is supported by the U.S. Mission to the European Union.

17.40 Welcome by H.E. Vsevolod Chentsov, Ambassador, Mission of Ukraine to the EU

18.10 Short Q&A session with the audience and the artist

18.30 Press interviews next to the artwork

Yevgenia Belorusets is a Ukrainian artist, writer, and photographer born in Kyiv in 1980. She lives and works between Berlin and Kyiv. In her works, she calls attention to the most vulnerable sections of Ukrainian society. Yevgenia is a co-founder of the journal Prostory, a member of the interdisciplinary curatorial collective Hudrada, an author of the photo series Victories of the Defeated and books Lucky Breaks (2022) and Series of Lectures on the Modern Life of Animals (2021).

Her works meet at the intersection of visual art, literature, journalism, and activism making a solid connection between document and artistic language. The most recent work The War Diary was presented alongside the wartime work of Ukrainian artists Nikita Kadan and Lesia Khomenko on the occasion of their exhibition at the 59th Venice Biennale. The Diary is available to read online.

I was writing a war diary from Kyiv, updated in real-time and published by Spiegel (DE) and ISOLARII (EN). It was released daily from 24.2. till 5.4.2022. Each day of the diary includes one to five photos.

It is an ongoing project, republished also at Artforum, written originally in German translated in several languages.

It was a part of the exhibition “This is Ukraine: Defending Freedom” at 59th Venice Biennale 2022, a joint force project between the PinchukArtCentre, the office of the President of Ukraine, and the Ministry of Culture.

About the Citizens’ Garden

The Citizens’ Garden is a green oasis in the busy European Quarter. Just 100 metres from the European Parliament’s official entrance, the garden is in the grounds of the former residence and studio of the 19th century artist Antoine Wiertz.

The garden opened to the public for the first time in September 2020 thanks to investment and renovation by the European Parliament.

EUNIC – European Union National Institutes for Culture – is the European network of organisations engaging in cultural relations. Together with our partners, we bring to life European cultural collaboration in more than 100 countries worldwide with a network of 136 clusters, drawing on the broad experience of our members from all EU Member States and associate countries.

EUNIC Brussels is the framework through which EU national cultural institutions, with a permanent presence in Belgium, together with their networks throughout Europe co-operate in the development and execution of multilateral cultural projects.

About the European Cultural Foundation

The European Cultural Foundation promotes a European sentiment through developing and supporting cultural initiatives that let us share, experience and imagine Europe. The foundation office in Amsterdam brings together 13 different nationalities, working as a dedicated team on realising the mission and vision.

If you would like to give support, you can do so via the United24 Platform. United24 was initiated by the President of Ukraine, Volodymyr Zelenskyy as the main venue for collecting charitable donations in support of Ukraine. Funds are transferred to the official accounts of the National Bank of Ukraine and allocated by assigned ministries to cover the most pressing needs.

One day more – Press Kit – here you will find the press release as well as images available to use.

Short Description of the artwork

One day more by Yevgenia Belorusets

Text on a surface of rusting iron

A Wartime Diary is a series of texts I started on February 24 in Kyiv. I was writing them in German for the newsmagazine Der Spiegel, but soon the daily entries began to appear in translation into English and other languages.

My native languages are Ukrainian and Russian. But in the first hours of the war other languages seemed better at making events visible faster. In wartime, languages turn into transportation networks for news about catastrophes and crimes. As a catastrophe is unfolding, the act of witness feels meaningful only if there is a chance for it to stop the catastrophe.

Every minute, every hour and every day of this war constitute a new crime. Temporal measurement breaks criminal acts down into parts, and each fragment of time may bear witness in court against those who unleashed this war.

Every daily entry in this diary was to be the last. I kept a diary but every day I was convinced that war would end on that day, that it could not go on even a minute longer.

Called “One day more,” this installation allows me to ponder the weight of a single day in the warzone. Words become one with things. In this war, the ruins of objects and cities will bear witness together with human beings. The surface of this object becomes rusted over: memory grows less distinct, but it does not vanish.