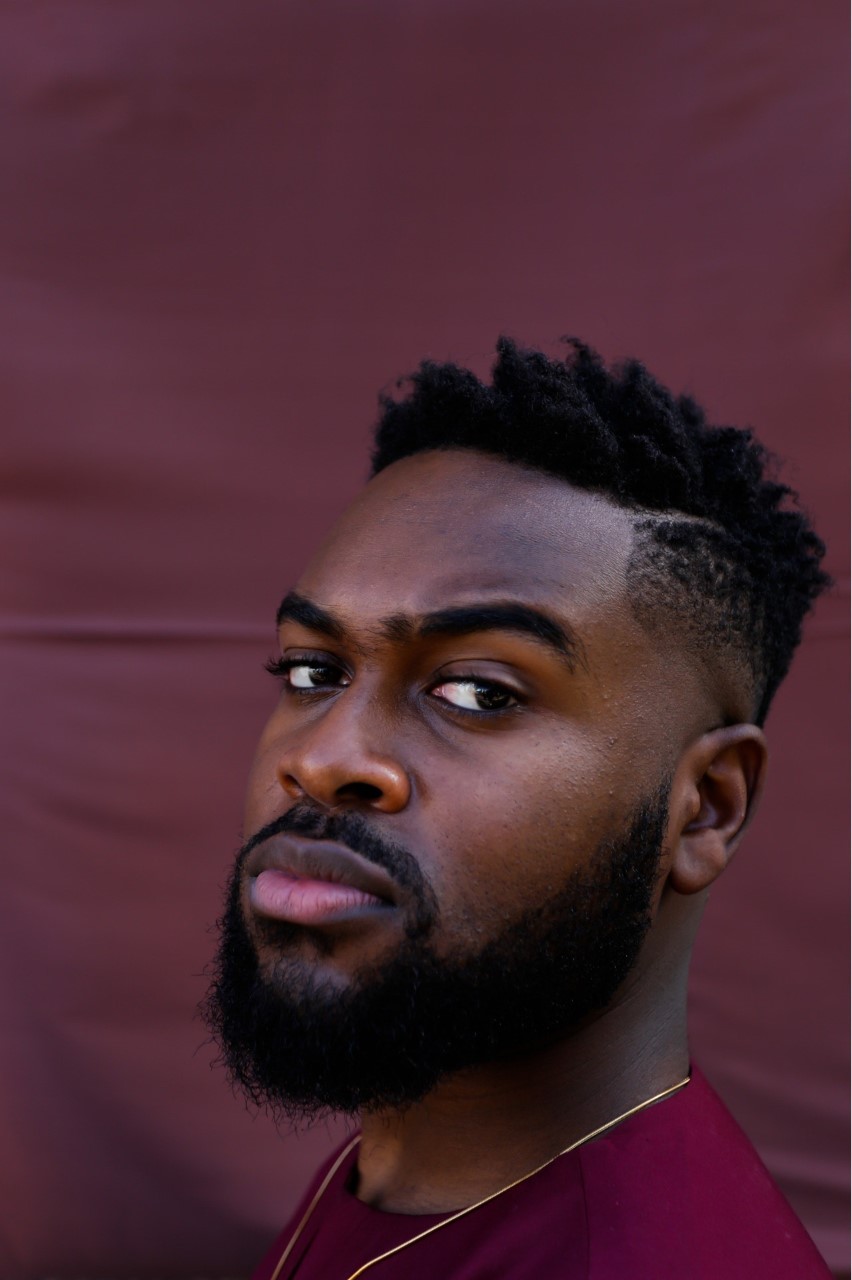 Kriticos Mwansa is a Belgian musician, currently studying Business Management and Marketing in Brussels. Kriticos was born in Zambia to Zambian-Greek and Tanzanian parents, and moved to Belgium at the age of 8. As a musician, Kriticos has made some significant career strives in East Africa with a recently released EP, and is now looking to branch out to the European market.

Kriticos was invited to join the RE/defining Masculinities project after his participation in the Big Conversation at Beursschouwburg in the spring of 2019. He was part of our RE/defining Masculinities Monologues series, and will also take part in the Crossing / Masculinity panel discussion on 29.11.2019 at 19:00 in Beurscafé in Brussels. Kriticos joined the project with pleasure, wanting to address the issues of toxic behaviour patterns he’s noticed in his surroundings, and wanted to discuss and object the subject of masculinity further – as well as learn more about the topic himself.

Can you give an example of how you experience masculinity today, in negative or positive terms?

“One example I can think of is while growing up in Zambia, I noticed that it was usually the man who would be the one that goes to school and gets a university degree and a job, while the woman is not expected to get a university degree. If she does go to university, she is still expected to stay home after she graduates. This wasn’t the case for my parents, because my mum was like ‘I’m not going to stay home’, and started her own business, and everything. But it’s been the case for a lot of my relatives – more so on my dad’s side than my mum’s.”

Would you say that growing up with a mum that stepped outside of those domesticated boundaries has impacted on how you view yourself as a man?

“Yeah, definitely. It took her stepping out of that expected gender role, and equally it took my dad supporting her for doing so. In our culture, it was not the thing to do, and my dad was very different from his brothers. Once she started her own business, he in turn started helping out at home and cooking, which was cool. In Zambian culture, the father is traditionally seen as the disciplinarian, and my dad chose to be a friend rather than an authority figure. So, in my case, I have seen a lot of positive models of masculinity. Not only in changing domestic roles, but also in the vulnerability I saw in my father, which allowed me to change the way I saw myself and to change the way I acted as a man. It also allowed me to see toxic masculinity patterns from a third person, by noticing them in people that I knew and in my surroundings.”

“I’ve seen my dad cry a couple of times. I can count them on one hand – but I’ve seen it happen. I remember once, I caught him crying and he told me he was just stressed with work, and asked me if he was being a good father. The fact that he opened up to me about that changed a lot, because it taught me that you can be honest about your insecurities and about things you don’t think are going okay. Oh, and another time I saw him cry was when Obama won.”

“I see a lot of toxic masculinity behaviours among friends.”

“I see a lot of toxic masculinity behaviours among friends. Guys that don’t have any problems on cheating on their girlfriends and so on. Sex and your ‘body count’ [number of sex partners] are still seen as important things among guys, especially in high school, and a lot of my friends held their number up as a trophy. For me, it was different, because I was basically the only virgin among my friends. I was never in a rush to have sex. My parents always taught me that it was a special thing, so I guess I felt it was a special union.”

How did you feel in the centre of all of that, being the person who wasn’t as sexually engaged as your peers?

“I felt all right, I think my parents did a good job in the sense that they taught me not to conform to the social pressures. Whether it was about sex, clothing brands or other things: they brought me and my sisters up to not be like that, to not be group-thinkers. I actually felt pretty cool about being a virgin, being different that way.”

“I think it was because of the role models I had at home that I felt comfortable in my own sense of masculinity. For many others, the role models of manliness would come from fictional characters, such as Scarface. I always thought that was weird, and I would rather look up to Will Smith or Maya Angelou, and I really like Chimamanda Ngozi Adichie. I think it’s because they reflect what I have seen with my mum and my dad. I didn’t realise how much they impacted me until I grew up and saw how guys around me were, and how they were with their dads. Like, some of them don’t have their dads around, which I think is also plays a role in the issue. When you don’t really have a father figure at home, you look for it elsewhere, and what you find might have an impact on who you become.”

Being young, have you noticed any differences in the masculine behaviour patterns between generations?

“I feel that my generation is more positive compared to previous generations. Still, we are not completely there yet. I think there are a lot of people in my generation that still have that same way of thinking as previous generations. Rape remains an issue, but the people I know are now more aware that clothing should not be used as an excuse when someone is raped. They understand that the fault is always with the rapist, and not the person that is raped. I think that my generation is more aware of these aspects than our predecessors, and down the line less people will be affected by what women wear. Because of on-line movements like the Free the Nipple movement, a lot of young people become exposed to it, and it becomes normalised. For example, if a woman walks down the street without a bra, older generations often react with accusations – ‘She looks like a prostitute’, you know. I think my generation is becoming less affected by how women dress, and I think future generations will be even less.”

“But at the same time, my generation still upholds models of toxic masculinity, especially as men tend to be competitive. You can’t be around another man that is doing better than you.  Men are constantly competing to become better than their peers. Men are also competing with women.  A lot of men in my generation still see a woman earning more than them as a problem.”

“A lot of men in my generation still see a woman earning more than them as a problem.”

“Another thing that we’ve inherited from previous generations is the body count. My brothers and I don’t really care much, but a lot of men see a woman with multiple sexual partners as something bad, while they admire men with a high body count. And also, the fact that women are still expected to do the cooking — it is still something that I can see in the people around me.”

What do you think would need to change for the future?

“The gaze on women needs to change. Women should be allowed to be their own selves. The lack of vulnerability among men has to change too, because that is not helping anyone. And men need to learn how to cook! It’s crazy you know, how so many world-famous chefs are men, yet men are not generally expected to cook, or simply aren’t inspired to cook. I cook, and I have started posting online how I prepare my meals. A lot of people have since shown an interest in my cooking, men as well as women.”

“And men need to hold other men accountable for what they do. I recently saw the series Unbelievable on Netflix, and things would have worked out so much more differently had the men been held accountable for their actions from the start. There is that scene in the bar, where this man stares at one of the female characters, and makes her very uncomfortable, yet he keeps staring. They filmed it in a way that really showed it from the woman’s perspective. I don’t think men realise how scary they are.”

“I don’t think men realise how scary they are.”

“Men need to hold each other accountable, not only when they are alone, but also when in groups of other men and women. If a man holds another man accountable, that is in a sense masculine. You are talking about what it is to be a man. I say the same thing in my talks about racial profiling. I could talk about racial profiling to a policeman for hours, but it’s up to the policeman to actually hold other policemen accountable for their actions against people of colour. If you wear the same badge as me, we can’t be treating a person differently. The same thing needs to happen with men. Men need to study the issue more and understand it better, and hold each other accountable.”

“And finally, we need to believe women. Men argue that women can lie about their assaults, but statistics show that it’s actually rare. Men need to stop questioning women’s experiences, or divert to what they were wearing, or what they did to cause the assault or rape.”

“The #metoo movement has brought up a lot of stories in the last few years, but for men it really came about with Terry Crews opening up about his experiences. And even then, a lot of men attacked him for it, calling him weak or even gay for coming out with his story. When he came out with it, it was very powerful. Before then, many men dismissed the #metoo movement as a ‘witch-hunt’, and questioned how they were now supposed to approach women – but that’s not the point at all. We should not be talking about what we can and cannot do, but we should be talking about what’s happening.”

A warm welcome to Yohannes!

Our new colleague Yohannes Henriksson started his internship at the institute one week ago. He will be working on our programme. We warmly welcome Yohannes!

It is time for a well deserved holiday for our team. Our office will be closed from the 18th until the 29th of July, but don’t worry, we’ll be back very soon. Wishing you a wonderful summer!

My time at Finncult as the EUNIC Brussels intern

Marking the end of our EUNIC presidency, Chloé Chabannes-Delcourt writes about her time at EUNIC-Brussels and the Institute where she has just completed her internship.

Starting from Staring by Katja and Birit Haarla premiers at Beursschouwburg on the 21st of June. The dance piece has been commissioned for EU-Sámi week in Brussels.

New European Bauhaus in the Nordics